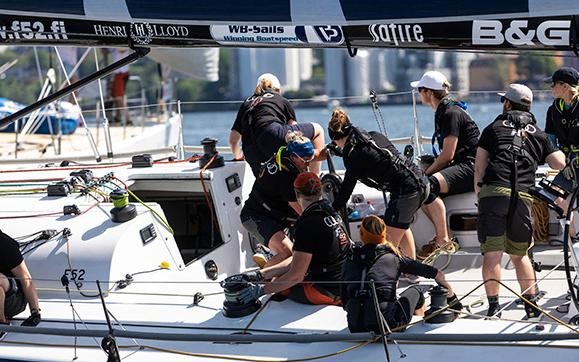 72 entries to compete from 8 nations for three 2019 ORC European Champion titles
Oxelosund, Sweden - ORC championship racing ORC championship racing re-focuses from the Med region to the Baltic with next week's start of the ORC European Championship 2019 in Oxelosund, Sweden. Hosted by the Oxelosund Sailing Club, this event held on the eastern coast of Sweden will bring 72 entries from 8 countries throughout Europe to race in three separate classes from Wednesday 14 August to Saturday 17 August.

The event starts with measurements, inspections, and registration held on Sunday and Monday 11-12 August, with the first Skipper's Meeting followed by a Practice Race held on Tuesday 13 August. Then racing commences on Wednesday with a windward-leeward Inshore race starting at midday, followed by an Offshore race held in the evening. Inshore racing will be held on two course areas: one for the 8 teams in Class A and 22 teams in Class B, and a second area for the 42 teams competing in Class C.

Racing then continues on Thursday 14 August with a single Inshore race, while the remaining days of Friday and Saturday 16-17 August will feature two Inshore races each day, followed by the Awards ceremony Saturday evening. European Champion prizes and titles are awarded for the top three results in each class, in addition to the top all-amateur Corinthian teams in each class as well.

Favorites to watch in ORC Class A include two podium finishers at past ORC Championship events: Erik Berth's Swan 45 Tarok 7 and Ralf Lassig's XP 44 Xenia. Berth and his team from Denmark won Silver medals in Class A at the ORC Worlds in Copenhagen in 2016 and Silvers again at the 2017 ORC European Championship in Gdansk. Lassig and his team from Germany were Bronze medalists in Class 2 at the last ORC European Championship held in Sweden, the 2013 edition sailed in Sandhamn.

Yet for local-based offshore prowess, Marcus Dennerstedt's Latini 52 Nirvana has to be considered a strong contender as well, having won their class in the AF Offshore Race in late June. Rolf Relander's modified Cookson 50 Furiosa from Estonia was second and Samuli Leisti's TP 52 Zer°Emission from Finland was third in this prestigious 352-mile race.

In Class B there are numerous teams that have faired well in past ORC Championships but one in particular stands out for their past success: Priit Tammemagi's modified X-41 Premium has been on the podium in Class B for all of the ORC European Championships held in the Baltic region in the last six years, including Silver in Sandhamn in 2013, Silver again in Parnu, Estonia in 2015, and Bronze in Gdansk in 2017. Also notable is Tiit Vihul's X-41 Olympic from Estonia who earned Bronze at last year's World Championship in The Hague, and Axel Seehafer's X-41 Sportsfreund from Germany who won the ORCi class at Kiel Week's Kiel Cup in June.

Class C is the largest and often the toughest class in ORC championship events. In Oxelosund this may be true as well, with several top contenders competing among 42 entries from 7 countries. However, one team stands out as the favorite on the strength of not just impressive local performance (they are the reigning AF Offshore Race champions in their class), but a string of multiple World and European Class C titles and podium finishes: Patrik Forsgren's modified First 36.7 Pro4U. This team from Stockholm has won both previous Baltic-based European championships in Gdansk in 2017 and Parnu in 2015, as well as winning Bronze at the Worlds in the Hague last year and in Copenhagen in 2016, Silver in Kiel in 2014, and Bronze in Helsinki in 2012.

But they will have some impressive opposition in two strong teams from Estonia. One is Ott Kikkas's Italia 9.98 Sugar, who in June while sailing their new Italia 11.98 won Gold in Class C at the 2019 ORC World Championship in Sibenik, Croatia. And in previous ORC European Championships they have also done well: Bronze in Gdansk in 2017, Silver in Porto Carras, Greece in 2016, Silver in Parnu in 2015, and Gold in Sandhamn in 2013.

Another is Aivar Tuulberg's Arcona 340 Katariina II, who with their mixed Italian/Estonian team are the reigning Class C European champions with Gold won in Limassol, Cyprus last year, in addition to Silver in Gdansk in 2017, Gold in Porto Carras in 2016 and Silver in Sandhamn in 2013.

Meanwhile before the start of the racing in Oxelosund, later this week on Thursday 8 August, about 30-40 boats are expected to also compete in the Swedish ORCi Offshore Championship being held at the Royal Swedish Yacht Club (KSSS) in Sandhamn, about 50 miles northeast. This is regarded to be one of the best regatta areas in Sweden and will feature three days of 7 races, including one offshore race and six inshore races.

This championship event will be used by some as a tune-up for the European Championship, and the top finisher among the Swedish teams will be crowned as the Swedish ORC National Champion.

For more information on the ORC European Championship 2019, visit https://orc2019.oxss.nu.

More on ORC rating systems, ORC certificates and events can be found at www.orc.org.
Since 1969, ORC has been a world leader in providing a scientific and transparent rating system used to create fair racing among a broad variety of boat types, from Sportboats to Superyachts. Nearly 10,000 ORC certificates were issued to boats from 45 countries by 35 ORC national rating offices in 2018. Since 1999 ORC has organized annual ORC World Championships, in 2018 a combined IRC/ORC Offshore World Championship, and other inshore and offshore racing events sanctioned by World Sailing, with recent events attracting over 100 entries from dozens of countries around the world.